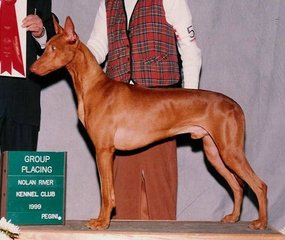 UTILIZATION : An alert keen hunter, hunting by scent and sight, using his ears to a marked degree when working close.

HEAD: Foreface slightly longer than skull. Top of skull parallel with foreface, whole head representing a blunt wedge when viewed in profile and from above.

BODY : Lithe with almost straight topline. Length of body from breast to haunch bone slightly longer than height at withers.

Croup : Slight slope down from croup to root of tail.

TAIL : Medium set, fairly thick at base and tapering (whip-like), reaching just below point of hock in repose. Carried high and curved when dog is in action. Tail should not be tucked between legs. A screw tail undesirable.

HINDQUARTERS : Strong and muscular. Limbs parallel when viewed from behind.

FEET : Strong, well knuckled and firm, turning neither in nor out. Paws well padded. Dewclaws may be removed.

GAIT/MOVEMENT : Free and flowing; head held fairly high and dog should cover ground well without any apparent effort. Legs and feet should move in line with body; any tendency to throw feet sideways, or high stepping «hackney» action highly undesirable.

HAIR : Short and glossy, ranging from fine and close to slightly harsh; no feathering.

White tip on tail strongly desired. White on chest (called «the star»). White on toes. Slim white blaze on center line of face permissible. Flecking or white other than above undesirable.

FAULTS: Any departure from the foregoing points should be considered a fault and the seriousness with which the fault should be regarded should be in exact proportion to its degree and its effect upon the health and welfare of the dog.

Any dog clearly showing physical or behavioural abnormalities shall be disqualified. 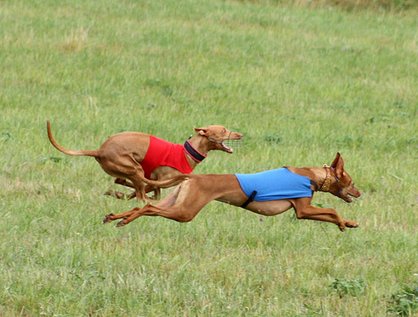