Best in Sighthound Specialty in Denmark 2012

Izzie is my long-awaited Finnish import. She is a super feminine bitch with good proportions, lovely movement and a happy, outgoing temperament. She has done very well in the show ring despite her young age, and she has just started her lure coursing career with success! She is a very keen hunter and I am looking forward to seeing what she can accomplish on the fields in 2011!

She started out year 2011 by gaining her final CC (and BOB & Group 4th)for her Norwegian Champion title at the first try after turning two years, under breed specialist Mrs. Annette Bystrup! A week later she won her final Swedish CC for her Swedish Champion title as well. During the summer she won 2 X French CCs at the World Dog Show and French Championship Show in Paris. She also won CACIB at the World Dog Show, finishing her International Champion title at the age of 2 years and 4 months, plus earned her second World Winner title! A week later she won Best of Breed at the European Lure Coursing Championship in Holland. In August she won Specialty Best In Show at the Norwegian Podenco Specialty under breed specialist Mr. Jarmo Vuorinen! Izzie was TOP WINNING PHARAOH HOUND in Norway 2011, 2012 and 2013.

Izzie is out of an artificial insemination between the gorgeous AM CH MultiBIS Anubis'Horus of Ghazzi-Isis JC "Horus" and C.I.B. SE FI NO EE CH FI LCCH EST V-06 KBH V-09 Siphra's Hunting Girl "Luna". Isabella's pedigree consists mostly of American, Finnish and Swedish bloodlines. Horus, one of my personal favourites, was one of the top winning Pharaoh Hounds in American breed history, linebred on the old American legend, AM CAN MEX CH SBIS Shema's Ghazzi Khan "Ghazzi". Luna was top winning Pharaoh Hound in Finland 2007 (conformation) and top winning lure coursing Pharaoh Hound in Finland 2010! She is a beautiful bitch with such a sweet temperament and beautiful movement! Luna's dam and Isabella's grandmother, Multi SBIS BISS C.I.B. FI SE & DK CH FIN V-01-05-06 KBH V-06 Magicway's Min For Siphra "Minea" is also one of my favourite Pharaoh Hounds, with a lovely outline and wonderful movement! 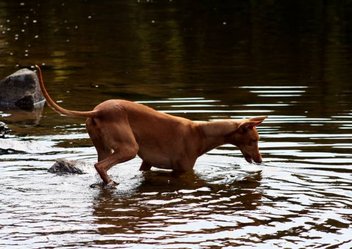